After spending an inordinate amount of time meeting three deadlines last week, I decided to cruise a bit the next morning and spend some time surfing through the social media sites in which I participate.

I started with Twitter. In the first hour, I received 206 tweets, or one every 18 seconds. I also received almost 150 updates from my LinkedIn connections, about 120 posts by my Facebook “friends,” plus 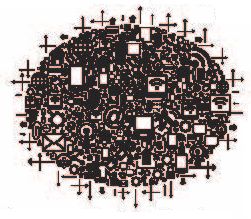 the activity from connections on STC’s social network, MySTC. This is on top of 34 email messages. And this doesn’t even count the discussions posted on the several LinkedIn groups to which I belong.

I tried reading them all, but I was simply overwhelmed by the volume. I realized that I could spend the entire day reading, responding, and participating.

I talked to a colleague about this. I smiled at his response. “I spent about an hour the other day reading through my Twitter stream. Lots of interesting stuff, but nothing earth shattering. I could easily waste my entire day on this and not get anything done.” As in “not get anything important done.” Now that’s drowning in social media.

Keep Yourself from Drowning. Here are a couple of ways to consider staying afloat.

Limit your daily interaction. There’s a Toyota Venza commercial (www.youtube.com/watch?v=TUGmcb3mhLM) that shows the juxtaposition of “older” parents (who are outdoors riding mountain bikes) with their a twenty-something daughter (who is interacting on Facebook). The message of the ad is clear: get out more; socially interact in person.

Streamline your Twitter Experience. Save searches based on your preferences and then search on just those preferences. For professional use, save searches on these hashtags: #techcomm , #stcorg , #stc12 (about this year’s STC conference), and #stc13 (next year’s conference).

Create a few lists to categorize the people who you are most interested in, such as professionals in technical communication or instructional design or education. You can add people to your lists even if you don’t follow them. If you think you have a great list, make it public so others can subscribe to it as well.

Streamline Your LinkedIn Experience. Whenever I used to open LinkedIn, I’d be inundated with updates from my connections. For many of these updates, I thought “So what?” That was before I edited my Update preferences. There are 18 update categories. LinkedIn’s default is for all 18 to be checked. I now only have 10 checked. Basically, I’ve removed any updates that are simple status changes (such as when a connection changes their profile photo). Consider what is most important to you and remove the rest. Then you can receive only information you consider important.

While you’re at it, manage your advertising preferences by clearing the checkbox about displaying ads on third-party websites.

You can also easily drown in emails sent by the groups you belong to. Do you really need to receive an email to announce each new discussion? Or would a daily digest suffice? If even that is too much, consider the weekly digest option. Your selection depends on what you are getting out of interacting with, and contributing to, the group.

One Final Life Preserver. In my previous column for Intercom , I wrote that I spend 20 minutes each morning on social media. Some mornings, I will admit, I just want to get started with my work, so I wait until the end of the day. With a day’s accomplishments behind, I feel less inundated (a word that interestingly enough derives from the Latin for flooded) and a bit more buoyant.

[Note: This post originally appeared in my “Social Media Insights” column in the March 2012 issue of Intercom, the magazine of the Society for Technical Communication (STC).]